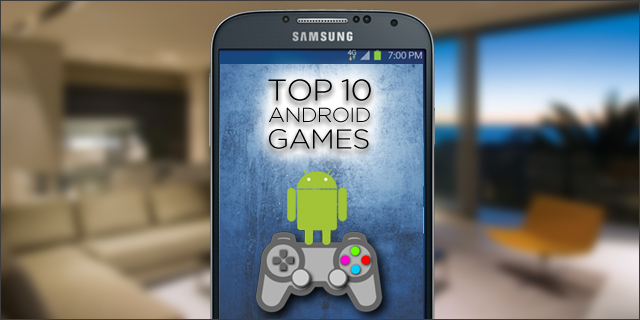 Gaming used to mean standing at a wooden cabinet with a giant screen that ate your quarters. Then it was sitting on your couch staring at your TV, or playing a PC game. Today, people put games on any screen they can lay their hands on, including their Android tablets and phones. Sure, you’re supposed to use your phone for important things and critically important apps, but there’s always time for a few games.


The Banner Saga
$9.99
This tactical, turn-based strategy game was a hit on the PC and has finally arrived on Android. Lead your party of Vikings through a gorgeous, mythic world and weave your own legendary story. Though the price tag is steep, the rewards are worthwhile (read: buy it). A sequel has recently invaded the Google Play store, but you should start your journey here.

Blizzard Hearthstone Heroes of Warcraft
Free
If last year you had told me that in the year of our lord 2017 I would be playing a collectible-card game based on World of Warcraft (WoW), I would have told you that seemed correct since I’ve been obsessed with Hearthstone for several years now. With endless variations on a simple game, Hearthstone jettisons the strife and ridiculous expense of collectible-card games and makes them fun again. Even as someone who isn’t a fan of WoW, I found the game be both accessible and light-hearted enough to suck me in.

The Battle of Polytopia
Free
The classic Civilization series does exist on mobile, but I’ve found the experience tedious and generally unenjoyable. Polytopia takes the strategy genre and boils it down to its bones, adds a layer of quirky, low-poly art, and polishes the result to a shine with addictive mobile play. It’s a great way to turn a quick trip to the bathroom into a half-hour journey of conquest.


Dots & Co
Free
Two Dots was a break-out hit for mobile gaming, deftly combining simple, portable play and a stylish design. Dots and Co isn’t so much a sequel as it is a riff on the first game, introducing new special abilities and challenges. It retains all the zen strategy of the original, with some new twists that make it feel fresh.

Clash Royale
Free
The follow-up to the mega-hit Clash of Clans, Clash Royale combines elements of DOTA 2, tower defense, and deck building into a shockingly charming package. It’s a fun and addictive mobile experience that can be played with just a thumb. You can even complete all those in-app purchases one-handed, too.

Kim Kardashian Hollywood
Free
Calm down, haters. Regardless of what you think about Kim K or casual gaming, Kim Kardashian Hollywood is an enormously fun, cleverly written, and enjoyably addictive breakout hit that is worth your time. I have nothing to add to our review’s excellent summation: “basically, it’s exactly like Grand Theft Auto: San Andreas.”

Monument Valley
$3.99
Monument Valley is an incredibly beautiful game, proving that mobile game doesn’t need to be synonymous with cheap and shallow. In this meditative puzzler, you have to use optical illusions to complete each gorgeous level. Meditative, mysterious, and intriguing, it’s a must-play Android game.

Free
2016 will be remembered for the deaths of many great entertainers, the collapse of Western democracy and, most importantly, for Pokémon Go. By tapping into your location data and your camera, Pokémon Go puts the pocketable monsters in our world. It’s a lot of fun, and a great excuse to explore your community. While the fad has certainly faded, the game is better than ever.

$2.99
Reigns takes the familiar swipe-right-or-left mechanic from Tinder and uses it to tell a strange generational story of palace intrigue. You’ll go through many kings along the way—sometimes very quickly—while trying to serve your people, respect the church, and fight off enemies. Oh, and Satan is after you. With retro looks and simple but challenging play, Reigns is an instant classic.

Free
Set Lustrous Prismneck to Maximum! In Spaceteam, you and the other people in the room work together to navigate a spacecraft through various mechanical disasters. If you and your friends love the techno-babble of Star Trek, then you’ll love this unique game.