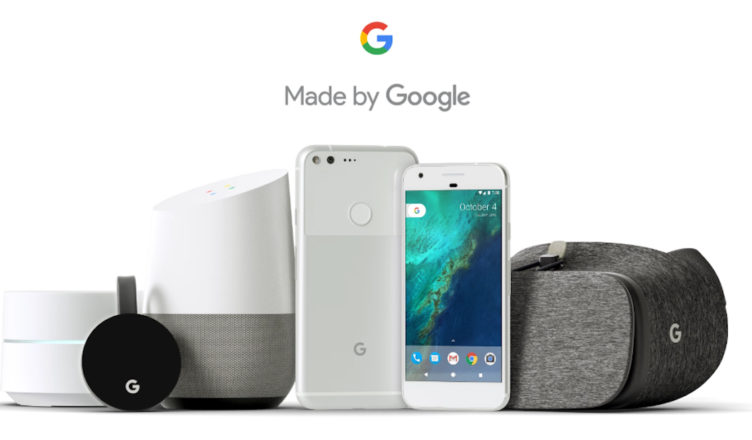 Google showed the new Google Pixel 2 smartphones. The new devices come with 6-inch and 5.5-inch displays. The Pixel 2 will launch in “kinda blue,” “just black” and “clearly white.” The 6-inch Pixel 2 XL features a plastic-OLED curved display that runs nearly to the edges. It looks an awful lot like the LG V30 smartphone it’s based on. The Pixel 2 XL will ship in black or black and white.

Google said users will get the same experience on both except when it comes to the screen sizes. The Pixel 2 and Pixel 2 XL feature an always-on display that shows notifications and the time even when the device is locked. The phones can also always detect any music playing in the background and will show the phone song right on your lock screen. Neither phone offers a headphone jack.

Also, you can take a selfie by squeezing the phone. The squeeze motion can also be set to perform other tasks. The phones run “pure Android Oreo,” Google said.

The Pixel 2 will also support Portrait mode, which Apple introduced on the iPhone 7 Plus last year and updated on the iPhone 8 Plus this year. Portrait mode applies blurring to the background to offer a more professional-look to pictures. Google uses a single camera lens instead of two, like Apple does. Portrait selfies are supported by the front camera, too.

Isabelle Olsson, the lead designer of Home hardware at Google unveiled the Google Home Mini which, as its name suggests, is a smaller version of the Google Home. It’s more affordable and will compete more closely with the Echo Dot, Amazon’s most affordable Echo. It’s controlled by touch — a simple tap on the top activates it — and Google says the sound quality is “amazing.” It will launch in three colors including coral, chalk and charcoal. It’ll cost $49 in the US.

Google also unveiled a high-end Google Home Max speaker that will take on more premium speakers like Sonos speakers. It includes a “Smart Sound” function powered by artificial intelligence to tweak sound for your environment to make sure audio always sounds as good as possible. Sonos has a similar function.

The Google Home Max will also compete with the Apple HomePod, which has Siri built-in, and Amazon’s brand new Echo speakers that include Alexa. Thanks to the built-in Google Assistant, users can ask the Google Home Max questions or stream millions of songs from YouTube Music, Spotify, Google Play Music and other services. Bluetooth, 3.5mm headphone input and more are also supported. It launches in December for $399.

Google also unveiled a new high-end Chromebook called the Google Pixelbook. It offers a 4-1 design that allows you to use it as a laptop, in a stand-mode for watching videos, in a tablet mode with the keyboard folded behind it, or in a tent mode to share the 12.3-inch touchscreen display.


It features a battery that offers up to 10 hours of use, up to 512GB of storage and a new feature that allows it to automatically use your phone’s data connection when Wi-Fi isn’t available. It’s the first laptop that will feature the Google Assistant, too, complete with a dedicated Google Assistant button on the keyboard. A Pixelbook Pen stylus will also be sold with the notebook.

Three configurations will be available, starting at $999 with the optional $99 Pixelbook Pen. Pre-orders open today in the US, Canada and the UK. The laptop will hit stores starting Oct. 31.

Google also unveiled new Google Pixel Buds, its first set of wireless Bluetooth headphones. They can provide notifications, read messages outloud, and can provide quick one-touch access to the Google Assistant. Even cooler, they can translate languages in real-time. They’ll ship with a case that provides charging for up to 24 hours of use. They’ll be available in white, blue and black and will ship in November for $159.

Google surprised the audience with a new camera called Google Clips. It automatically takes photos as you go throughout your day. An artificial intelligence engine inside looks for smiles, people you care about, dogs chasing their tails, and automatically captures the moment. Google says it will get smarter over time. It has a shutter button but is also hands-free and can be attached to almost anything, Google said. Photos and video clips can be saved individually to Google Photos.