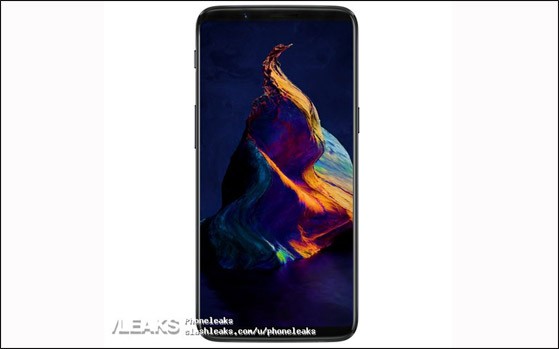 he rumours around the OnePlus 5T are now coming thick and fast. Although an earlier report noted that this year OnePlus will not launch the T version of its phone, of late the chatter around the OnePlus 5T is so strong that it seems that report was not accurate. The OnePlus 5T is indeed coming and it is going to have a slightly revamped design with an almost bezel-less screen that has a aspect ratio of 18:9.


This information is revealed by a fresh render of the phone leaked by Slashleaks. The leaked render shows the front of the device, with an edge-to-edge display that looks very similar to what we have seen in the V20 and the V30. Interestingly, the image also shows that OnePlus 5T may not have the fingerprint sensor on the front.

Apart from the display, here are some more details that has been rumoured about the OnePlus 5T.

— The phone will have a metal body similar to that of the OnePlus 5.


— On the front, expect the 16-megapixel camera.

— On the front, also expect almost a bezel-less screen. This will help the OnePlus 5T compete with the phones like LG V30, Xiaomi Mi Mix 2 and others.

— Apart from the screen, no other major changes are expected. However, given that the area under the screen is going to increase — it is expected to come with the 6-inch screen — there is a possibility that battery size increases too. The OnePlus 5T could come with a 4000 mAh battery.

— The software in the OnePlus 5T will almost certainly be Android Oreo, which will be customised with Oxygen OS.

— Expect the same 6GB RAM, 64GB internal storage in the OnePlus 5T that is there in the current OnePlus 5.

— Also, the chipset in the phone is going to be the same one that is inside the OnePlus 5. In other words, Qualcomm Snapdragon 835. Current, this is the highest-end chipset and processor available to Android phone makers and it is not going to change anytime soon, or definitely not before end of the year. So there is no chance that OnePlus 5T will come with anything other than the Snapdragon 835.


Currently, there is no word on when the OnePlus 5T may launch. But if it is coming — and all indications are that it is coming — it will come before the end of this year, possibly even in November. The only bit that is certain right now is that the OnePlus 5T, whenever it launches globally, will also launch in India at the same time.